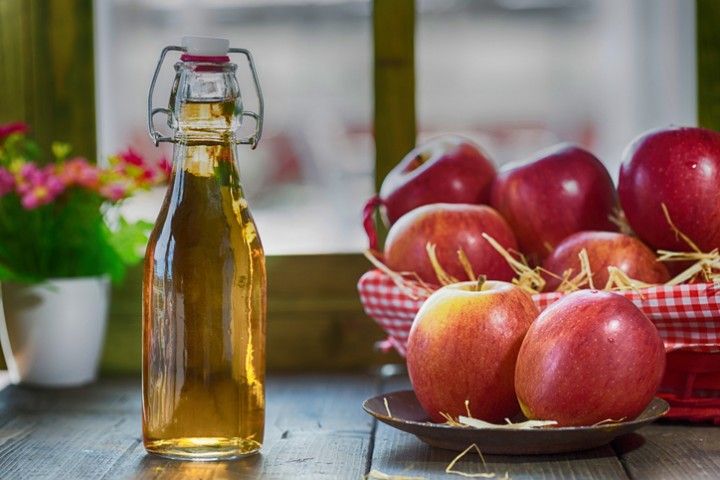 Apple Cider Vinegar, also known as ACV, is considered to have significant benefits which are helpful in the weight loss process.

ACV is often looked at as a natural remedy by individuals, used for curative measures and also acts as a preventative. However, the weight loss property of Apple Cider Vinegar is one of the most preferred characteristics of it. The fact that ACV supports or helps you in losing weight can be cherished as several studies and researches have been made on this to support it.

Apple Cider Vinegar is prepared by crushing apples, applying distillation, and fermentation.The result of this is a high acetic acid containing the liquid which supports weight loss.

1. It works as the best appetite suppressor

By consuming Apple Cider Vinegar, you get a feeling of being satiated. Acetic Acid is one of the important ingredients in the Apple Cider Vinegar, as a constituent of Vinegar.
Studies show consuming more ACV made individuals fuller more quickly compared to people who did not consume it. Hence, the more Acetic acid you consume, the fuller or more satiated one gets.

Very helpful for diabetic patients, as even after high consumption of carbohydrates there was no negative spike in their blood sugar level. Studies also proved individuals that had a higher dose of ACV could see the effects of it even after one hour of eating.

3. Prevents the accumulation of fat

One of the important aspects of weight loss is the prevention of fat accumulation in the body. ACV is an active metabolism stimulator which allows you to burn fat quickly.

Various acid and enzymes help to improve the metabolism and the rate of burning. Acetic acid plays an important role in this as it suppresses fat accumulation in the body. It also helps you to prevent increased cholesterol levels.

4. ACV has a major impact on insulin secretion

We are aware that insulin levels play an important role in fat storage. It helps in the production of insulin(reducing the blood sugar level) and often acts as a diabetic drug. It also ensures that the sugar in the food is oxidized and converted to energy and less is stored as fat.

It does help in controlling diabetes, so it becomes an important food for people that are suffering from type-2 diabetes.

5. Promotes detoxification in the body

Good digestion and metabolism are the keys to proper weight loss. As your body detoxifies or get rids of toxins, the efficiency of the body to perform physiological processes increases.

ACV helps to clean the body and absorb nutrients from food effectively. ACV also consists of insoluble fiber, which improves bowel movements, helping in the excretion of toxic materials.

There are several recipes for Apple Cider Vinegar. However, we shall recommend you consume 1-2 teaspoon or 1 tablespoon of Apple Cider Vinegar with one glass of water. Drinking it three times daily shall provide you with effective weight loss results.

Some recommendations for using ACV or Apple Cider Vinegar

Make sure to take at least a week off after continuous consumption of ACV for two to three months, as regular use of ACV can lower the iodine content in the body.

Use of Apple Cider Vinegar will help you with natural and gradual loss of weight, so be patient. Make sure you give ample time to ACV to make it a real success.